THE VOICE OF CREDIBILITY & PROFESSIONALISM FOR EXHIBITION ORGANISERS

An Insider Perspective on China

AAXO Interview with Joey Pather on an Insider Perspective on China.

Senior Vice President of the Galaxy Entertainment Group, Joey Pather talks to AAXO Chairperson, Projeni Pather about the changes and developments in the events and exhibition space now taking place in China. 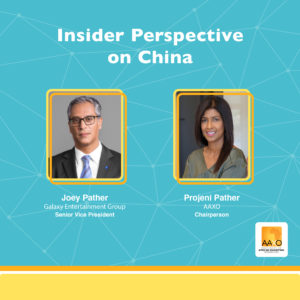 Joey Pather is Senior Vice President of Galaxy Entertainment Group.Galaxy is the largest gaming company in the world – currently building a stand alone conference and expo venue (with a 700 key hotel and 16000 seat arena).

Joey was also the Chief Executive Officer (CEO) of the Tanzhou International Convention and Exhibition Centre (GICEC), located in the Pearl River Delta in Southern China. The organisation provides a platform for the MICE industry in this vibrant industrial and financial hub of China.

Appointed by the world-class Deutsche Messe (DMAG) in Germany, Joey opened this prestigious venue in September 2016, consisting of 50 000 m2 of purpose-built exhibition space as well as a 20 000 m2 convention centre. Joey is currently playing an instrumental role in the design and development of the centre’s 7.5 billion Yuan expansion involving an additional 50 000 m2 of exhibition space together with a 500 room hotel hotel complex and business hub. The venue will be completed and operational at the end of 2018.

Joey commenced his career in the MICE industry in May 1997 where he opened the Durban International Convention Centre Durban (ICCD) – the first purpose-built convention centre in South Africa. Hired as a Functions Manager, he was quickly promoted to Beverage Manager and then Operations Manager. Many industry standards that are practised today were developed and implemented by Joey during his tenure at ICCD.

Joey was promoted to Chief Operating Officer (COO) in January 2010 where he led the CTICC’s executive team comprising Operations, Catering, Finance, Human Resources and Commercial and Business Development. In this role he ensured seamless operational activities, financial success and an international and local profile of the CTICC.

In 2012 Joey was appointed as Managing Director of the Tsebo Outsourcing Group. The organization provides an outsourced solution to some 140 clients employing 3000 staff. With his prior experience in the business tourism and hospitality sector he successfully elevated Tsebo’s position in very competitive market enabling a year-on-year growth of 30%.

Joey is a visionary leader and inspires action through his commitment to empowering his staff. He has a unique ability to unite all stakeholders to strive towards a common goal. Through extensive international travel, Joey has developed a network of key industry role-players and has successfully positioned the organisations he has worked for as industry benchmarks.

He has served on several boards over the years and is currently a board member for the GICEC.

Joey holds an Executive MBA from the University of Cape Town’s Graduate School of Business and a National Diploma in Hospitality Management from the Durban University of Technology.

We use cookies on our website to give you the most relevant experience by remembering your preferences and repeat visits. By clicking “Accept”, you consent to the use of ALL the cookies.
Cookie settingsACCEPT
Manage consent

This website uses cookies to improve your experience while you navigate through the website. Out of these, the cookies that are categorized as necessary are stored on your browser as they are essential for the working of basic functionalities of the website. We also use third-party cookies that help us analyze and understand how you use this website. These cookies will be stored in your browser only with your consent. You also have the option to opt-out of these cookies. But opting out of some of these cookies may affect your browsing experience.
Necessary Always Enabled
Necessary cookies are absolutely essential for the website to function properly. These cookies ensure basic functionalities and security features of the website, anonymously.
Functional
Functional cookies help to perform certain functionalities like sharing the content of the website on social media platforms, collect feedbacks, and other third-party features.
Performance
Performance cookies are used to understand and analyze the key performance indexes of the website which helps in delivering a better user experience for the visitors.
Analytics
Analytical cookies are used to understand how visitors interact with the website. These cookies help provide information on metrics the number of visitors, bounce rate, traffic source, etc.
Advertisement
Advertisement cookies are used to provide visitors with relevant ads and marketing campaigns. These cookies track visitors across websites and collect information to provide customized ads.
Others
Other uncategorized cookies are those that are being analyzed and have not been classified into a category as yet.
SAVE & ACCEPT